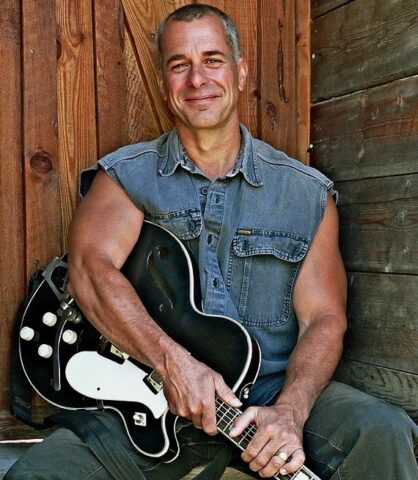 •”Downey is a BRILLIANT guitarist, with a superb instrumental acoustic guitar album and an equally FASCINATING rock record. Downey is a MAJOR TALENT who bears repeated listening, no matter what, Downey is a MUST SEE!”
Los Angeles Reader

•“The man is ALIVE AND WANTED! Leo Downey is talented….HE ROCKS!…and he’s got a voice as big as all outdoors!”
Bill Locey – Los Angeles Times

He felt his spirit calling him. He recognized a pivotal fork in the road of his life and choose to follow his heart and leave the world behind. He lived most of the next three years wandering in the spirit, sleeping on the ground under the open sky, surviving as much as possible on what he could hunt and gather. Alone in the semi-arid desert of the Sierra Madre Mountains and the Native Chumash “House of the Sun” their “Garden of Eden”, he experienced miracles. When he was 17 on his first solo journey, he went in asking Jesus for an answer to a decision he had to make and found a bible under a huge rock. He began guiding people into this desert on vision quests, earned his wilderness guiding license and worked extensively as a volunteer on the California Condor Recovery Project. He claims that among other miracles, he encountered the Virgin, Mary, mystically and that she showed him what a woman was and changed him forever. In this setting he fell in love and married his wife. In 1998 they moved to the Canadian Rockies and began raising their family and a herd of buffalo.

•“Downey combines innocence with a startling awareness of the world around him, to invoke wondrous spiritual images…the melodies are tempered with a fury that can embroil us in a torrent, an emotional downpour!”
Eugene Pidgeon – KCQR Santa Barbara

•”Headliner Leo Downey DID IT ALL! The audience was AWESTRUCK by his talents…his strong classical influences and a wide selection of self-written songs which brought the crowd to their feet in seconds!”
Review Herald

This Canadian road led him full circle back to the roots of why he loved to write, sing and perform music in the first place. Leo is a prolific writer of true stories in song. He sings honestly about real things, people and the moment, love and spirituality. He tells his story in an intimate sharing of himself with a  catalytic kind of vulnerability and honesty. There is something unique about Leo that is both blatant and hard to put your finger on.  This time, his time has come.

•“When I featured Downey’s Heaven and Hell as album of the week, I received more calls than any other album I’ve ever featured…People want to know “WHO IS THAT GUY?!”
Rick Miller – KMMT Mammoth

• “It was MADNESS! Sheer and beautiful MADNESS! Downey gave an excitable gathering of industry moguls and labels bigwigs a full-service dosage of his ARENA WORTHY rock and roll!”
Eugene Pidgeon – Santa Barbara Independent

biographypastpresent
Merry Christmas One and All
Announcing my new website!