Excerpts from “Wandering in the Spirit” by Leo Downey 11/12

The Montecito rats were munching and chewing and crunching, but even they wouldn’t eat their own heads. I rolled over to rest in perfect alignment with that big orb weaver in the middle of his web in the middle of the full moon the night before I entered the Monastery. I was ready to die there and thought I would and I knew that Spider was saying something to me. It felt good to know and I was fine no

t knowing. When spiders speak, I “listen.”How do you listen to a spider? He tells you. I don’t listen to tons of spiders. Most of them are minding their own business and I try to mind mine. I knew this one was there to tell me something, sometimes they are there to witness something, but for some reason, it’s always important. God speaks through His creation of symbols to man; God’s symbol.This needs a little background and can’t happen in one or two excerpts so I’m not going to try, your writing the book with me. Besides, things that happen on the path as we wander in the spirit are stories. The first time I went to the Immaculate Heart Hermitage, a Catholic Monastery on the Big Sur Coast, It was 1986, long before that spider spoke and I left the world and entered it. I was taking, “Carmel,” a second edition of my first CD of original instrumentals on the Spanish/Classical guitar to dozens of places along the coast between Santa Barbara and San Francisco that were selling it. In those days there were lots of coffee houses and galleries and bookstores that would play your CD for their customers to hear and buy. Carmel was selling very well. People would hear it and buy it and the stores wanted it. People liked it very much, they even thought it was beautiful. I was so happy and felt so good about that accomplishment. I was able to get national distribution for it through Narada Records and also full rotation on the Wave, one of the biggest F.M. radio stations syndicated out of L.A. If I could fill out forms and file papers I think I’d do something along those lines again today. 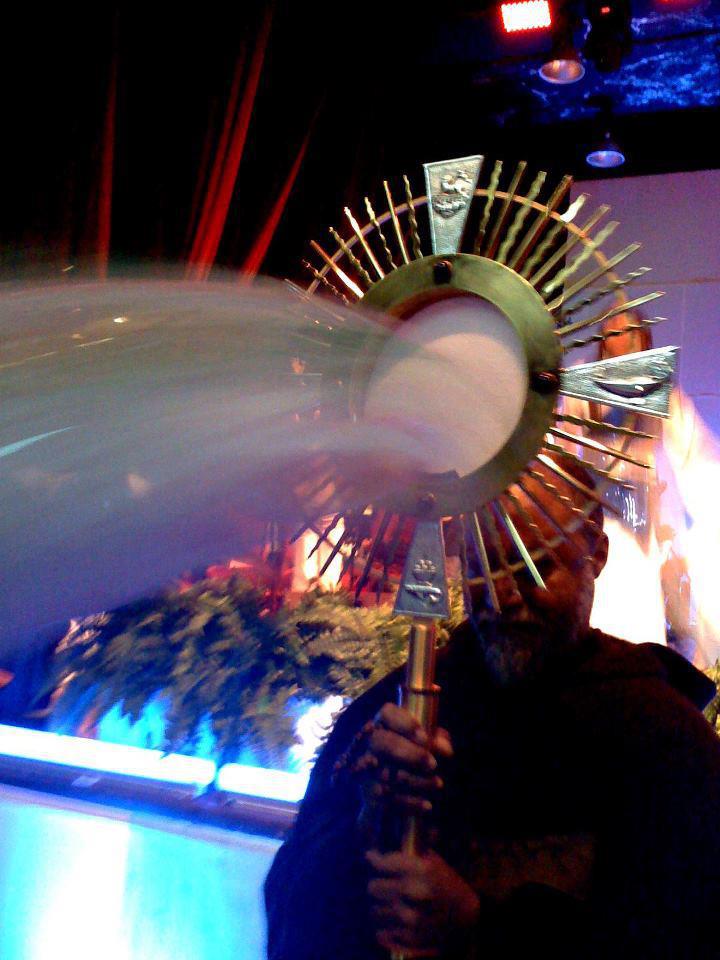 At the time I was also recording my first rock record, “Heaven and Hell” with my band. I was dating a very beautiful Playboy Bunny and budding actress on the scene. It was the first time I had stayed in a relationship when I wasn’t in love, we wanted to be and tried, but we ended up giving each other something other than love we thought we wanted. It was shortly after I’d kicked that guys door in when I saw him and Elan in each others arms kissing. She came into the Harbor Restaurant in Santa Barbara where I was playing and asked me if I would like to be her Valentine. You might think about a girl like that walking up to you and giving you herself, what would you do? That bunny was a hot potato.As I drove up Highway One in my convertible Fiat Spider, around the most beautiful curves a thousand feet above the Pacific Ocean on the most romantic and powerful coastline in my world, the place of my birth, I saw a sign. It was hidden back in the bushes and I’d never noticed it all those many times I’d driven past it before. It said, “Immaculate Heart Hermitage.” I’d been praying a prayer out of a book I’d been reading called, “A Course in Miracles” It was a good book and it reminded me of the illusion I’d find in a body, my own or someone else’s. Little did I know I was about to find reality in Gods.

I drove another thousand feet up the pampas grass ridge of a redwood canyon and walked into a dark and quiet octagonal Catholic Church, empty but for an altar in the Center. A priest named father Francis asked me if I would like to talk to him. I explained my journey and it became an organic confession. The Course in Miracles stressed the power of the, “Holy Relationship” and as I spoke and he listened and as he spoke and I listened I realized that was what this was.

There is so much to tell you that bears meaning if you ‘want’ to know, so much, but I can only play and you can only hear so many notes at a time. This one is played on the Angelus; bells that call angels. If I play you one can I play you more? If I make love with you once, can I make love with you again? Because once is not enough, each step forms a chain and breaks a path, like the path of the buffalo, from the beginning to the end when I believe we will start over and love each other again, new.

He listened and we cried and he said, “Tell me everything, not because I want to know, but because then you begin to know the Mercy of Christ, who will forgive you and me for everything. And as every sacred mystery that has ever revealed itself to me, everything was the opposite of what I thought it would be, I found some of what I thought I had done had been done to me. Confession is a sacrament, a sacred prayer and channel of God’s grace that Jesus gave to His apostles when he sent them in an unending line of succession, a blood tribe of the Lion. He ‘breathed’ on them and said, “I send you as the Father has sent me, who’s sins you forgive are forgiven, who’s you retain are retained.” Think about somebody breathing on you and saying that, somebody you believed had been killed and come back to life. And then he gave me the Body of Christ, this is one of the beliefs that makes the Catholic church different from a non-Catholic church. It also makes matter sacred. We believe the bread and wine actually do become the body and blood of Christ because Christ said they did, over and over. Obviously if I believe this, it’s a different experience for me than if I don’t, but whether I do or not, if it is, it’s, “Something else.” Kind of like bringing forth a song, it’s an act of faith and an act of love, it’s a creative act to believe it and I want to for an infinite number of reasons that are meaningful and are more notes to play you on the chord. The notes on the chord form harmonies and reveal more the fullness, like steps on the path. If you look at one track and then start looking for what left it, it’s difficult to find it, but when you want to enough, you find all the tracks, even partial little pressure releases and they begin to tell a fascinating and fun story to read. It’s very easy to want to believe that you don’t believe it though and I try to sincerely respect the wish of anyone that wants to not believe it.

I ate the mystical real body and blood of Christ, and like the whole unbelievable story of Christ, I believed it. Me telling you I believe something doesn’t mean much, but me telling you what I read in the tracks and hear in the bells of the chord is beautiful. If you don’t want to look at it or see it, you probably won’t, whether it’s true or not, until you do, or you don’t. But next I’ll begin to tell you things that happened when I did.

Consuming Beauty
How She Would Cry For You